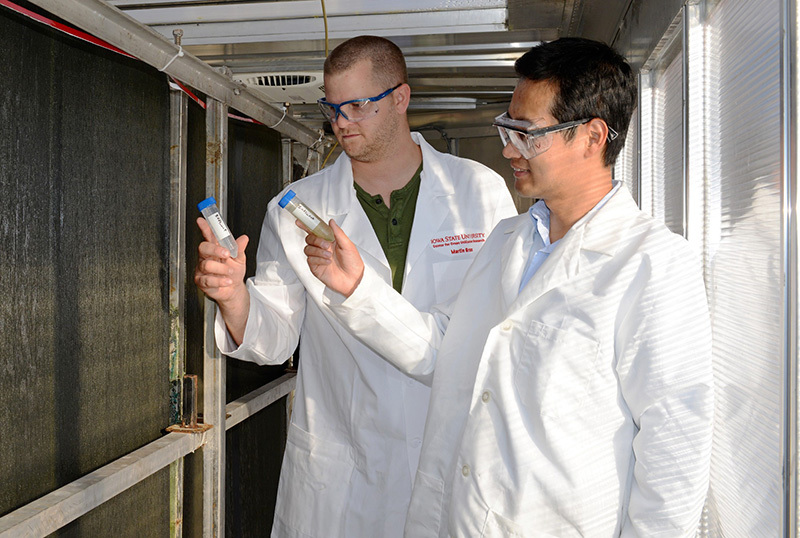 Martin Gross and Zhiyou Wen knew a lot about algae but little about business.

Gross, a postdoctoral researcher, and Wen, professor of food science and human nutrition, invented a cost-effective way to cultivate algae, which has many industrial uses. But they struggled to find funding or customers for the company they formed. Over five years, they applied unsuccessfully for seven Small Business Innovation Research (SBIR) grants, a competitive federal funding program for startups.

“We’re scientists and engineers. We weren’t trained in business,” Gross said. “We knew what the technology does, but we didn’t know what the customer wants. Or even how to get ahold of them.”

In 2016, Gross-Wen Technologies was in the first cohort of the Startup Factory, a yearlong business accelerator program in Iowa State’s office of economic development and industry relations. The Startup Factory’s president, Bill Adamowski, had some tips on their pitch.

“You’re not algae guys. You guys are a wastewater treatment company that happens to use algae. If someone in the crowd wants to go into algae talk with you all day long, go for it. But your value proposition is cleaning water,” Adamowski recalled telling them.

Since then, Gross-Wen has gone three-for-three on SBIR applications, grants worth a combined $800,000.

“I think our ideas were always good, but we didn’t have the commercialization,” Gross said.

That gulf between academia and the business world is a common obstacle to university research producing private enterprise. Scientists and scholars who break new ground often don’t have the time, means or inclination to market their innovations. Students and young alumni inspired to take the leap often don’t have the connections, experience or cash.

In hopes of becoming a company creation hotbed, Iowa State is bridging those divides with an aggressive expansion of programs to help faculty, staff, alumni and students build startups. The push has yielded dividends and could grow even further under President-select Wendy Wintersteen, who has called for a bigger focus on entrepreneurship across the university. 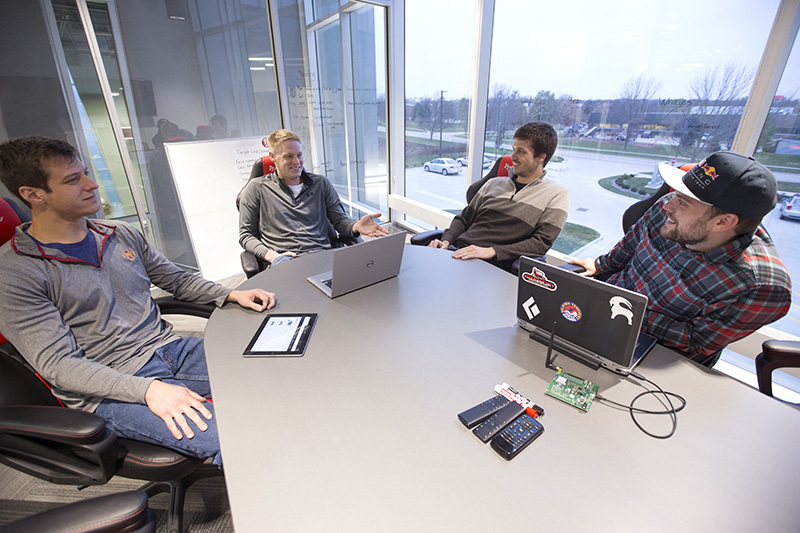 Colin Hurd, second from left, meets with some of his colleagues at SmartAg, which sells technology that lets farmers make some of their field machines driverless. Seated from left are Andrew Johnson, Hurd, Paul Hovey and Quincy Milloy. Photo by Christopher Gannon.

In addition to the Startup Factory, there’s a summer program helping students build their businesses, a university-facilitated group of private investors plowing seed money into agricultural startups and a federal grant for testing the commercial possibilities of faculty research — all new within the last two years, initiatives that are complementary but decentralized.

“I think there’s a lot of positive energy going on,” said Colin Hurd, who was in the Startup Factory’s first cohort and was followed by two of his brothers — one each in the next two groups.

“The difference between now and then is pretty drastic,” he said. “The Startup Factory introduced me to some valuable people. I had something of an existing network, but it helped expand that.”

“It just becomes a really powerful thing from a momentum perspective,” said Kimle, the Bruce Rastetter Chair in Agricultural Entrepreneurship.

More is Adamowski’s goal, too. He wants the Startup Factory to generate 20 new businesses a year. That would establish the university as one of the nation’s top five startup schools and the best in the Midwest, he said.

“If we’re going to create a culture change here at Iowa State, my thought was we didn’t want to come in and say, ‘We want to be incrementally better than last year.’ There’s just no fun or interest in that. The key is ‘let’s go,'” he said.

So far, it’s working. The Startup Factory, which in July welcomed its third cohort in a year, helped the Office of Intellectual Property and Technology Transfer and the ISU Research Foundation license a record 10 startups in fiscal year 2017, executive director Lisa Lorenzen told the state Board of Regents last month. The first two cohorts have created nearly 50 jobs and secured about $5.5 million in outside funding, she said. 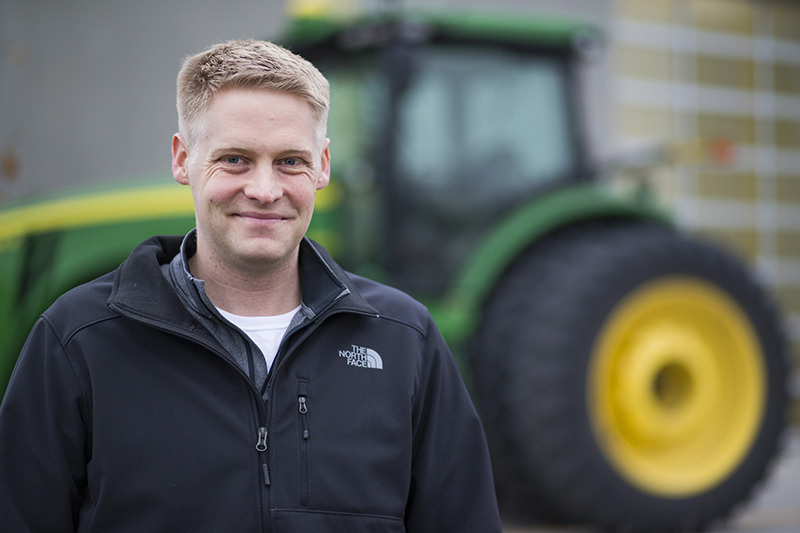 Colin Hurd, founder of SmartAg, which sells technology that lets farmers make some of their field machines driverless. Photo by Christopher Gannon.

The first half of the Startup Factory’s yearlong program is a formal crash course in business development, with a rotating group of volunteer entrepreneurs delivering weekly lessons on legal, financial, marketing, digital and sales issues. The less-structured second 26 weeks is about getting the startup off the launch pad. Depending on individual needs, founders might be working on their pitch or pursuing investors and customers.

After their year is up, companies still can base their operations in the Startup Factory offices on the second floor of the ISU Research Park’s Vermeer Applied Technology Hub. Three dozen businesses have participated in the program, which will launch its fourth cohort in January.

Most of the startups are science-based, trying to get from the lab to the boardroom. In selecting participants, the preference is for “big ideas, big problems, things that need capital,” Adamowski said. Postdocs, graduate students and recent graduates are often at the helm, as leading a company requires a full-time commitment faculty can’t provide.

“If you’re not serious about it, this program’s not for you,” he said.

The program is meant to be a “third founder” of sorts, providing the skills a company’s creators may lack, he said. Instead of, say, providing a founder with a list of lawyers to call for legal advice, the Startup Factory sets up the meeting. Or it can help land those crucial first customers, before a company has a track record. It’s like having an experienced executive on the management team, without giving up any equity.

Another benefit of the program is the entrepreneurs who serve as teachers, said Adamowksi, who visited and studied numerous other university-based startup incubators before launching Iowa State’s. He patterned the use of outside experts off Stanford University, where Silicon Valley innovators and investors are frequent instructors.

The mentorship is valuable, sometimes literally. Dave Furbush, founder of a Des Moines management consultancy, became aware of Gross-Wen while volunteering with the Startup Factory and invested $225,000.

“You want those kinds of people hanging out by the program,” Adamowski said.

A pilot facility in Chicago testing the wastewater treatment technology invented by Martin Gross and Zhiyou Wen, based on discoveries they made at Iowa State. Submitted photo.

The new business-building initiatives are meant to assist all walks of Iowa Staters, from freshmen to faculty.

The earliest-stage accelerator in the continuum is CYstarters, which pays students or recent grads a stipend to work on their business idea for 10 weeks during the summer. Two cohorts have been through the program, which is run by Diana Wright, marketing and program coordinator for the university’s Pappajohn Center for Entrepreneurship.

Wright studied entrepreneurship as an Iowa State undergraduate and worked for a startup for two years after graduating. She returned to Iowa State in 2015 as a staffer.

“I got to create the program I wished existed when I was here,” she said.

Wright likens CYstarters to an internship at the student’s own company. It provides time, funding and guidance, all crucial for nurturing fledgling companies. Plus, the student CEOs have benefited from each other’s varying skill sets, she said. A mechanical engineer might help with another team’s prototype, while coders and designers can pitch in on app and website issues.

“That just kind of happened. We didn’t necessarily plan that,” she said, adding: “A lot of times, entrepreneurship is kind of lonely.”

Entrepreneurship also can be risky, more so for students who have strong job options, Kimle said. Last year, the Agricultural Entrepreneurship Initiative helped organize the Ag Startup Engine, a private-sector group of investors that funds innovative ag-tech ventures with Iowa State ties. For a recent grad deciding whether to develop or desert a promising enterprise, that might mean having rent money.

“It gives them a plausible explanation to their parents for why they turned down a job,” Kimle said.

The group of nine investors has funded five companies, four of them from the Startup Factory — including SmartAg and Gross-Wen. It plans to invest in 10 more.

Hurd said the $50,000 Ag Startup Engine investment in SmartAg is one reason his second business is thriving more than his first.

“I haven’t had to give away half the company right away,” he said. 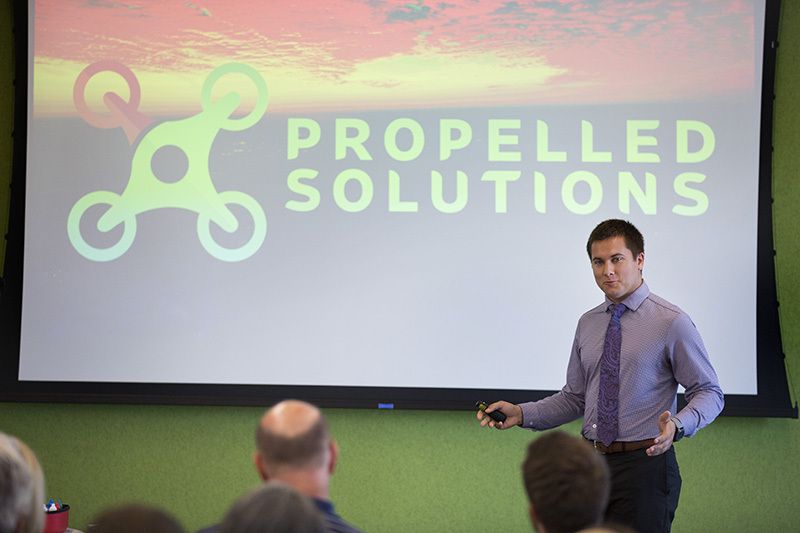 Nolan Herlocker of Cedar Rapids delivers a presentation on his business, Propelled Solutions, at the CYstarters finale event July 28, at the ISU Economic Development Core Facility. Photo by Christopher Gannon.

Providing supportive programs that connect budding capitalists with investors and mentors is important, but strengthening Iowa State’s startup culture also requires the idea of building a business to capture more “mindshare,” Adamowski said. Scholars accustomed to securing grants to spread knowledge via publication may not consider their work’s commercial impact.

“How do you convince faculty members that startups are interesting? That’s a big piece of it,” Adamowski said. “If there’s an interest, they need to know there’s a path.”

A new federal grant is helping smooth that path. The National Science Foundation earlier this year named Iowa State an Innovation Corps site, a program designed to shepherd NSF-funded research into the marketplace. Thirty Iowa State teams per year will receive $3,000 micro-grants to discover potential customers. The first group is going through the program, and applications for the spring group are being accepted until Jan. 31, 2018.

“It’s to tip the toe in there,” said Adamowski, the co-principal investigator on the grant along with fellow EDIR program manager Kristine Johansen. “We live in a society where failure is shunned. Startups are about trying stuff, and sometimes it doesn’t work.”

Each Innovation Corps team has a graduate student or postdoc as the business lead, an entrepreneur as a mentor and a faculty member whose research is being explored. That dynamic is how university research typically comes to market, Adamowski said: Faculty do the research, with a member of their team stepping forward to run the company.

Research discovered on campus is owned by the university, which licenses the technology back to the startup. Faculty involved in the research may receive royalties, Adamowski said. A startup can’t use university resources for free, one of many conflict of interest considerations.

“There are processes in place to make sure everything falls into the right realm,” Adamowski said, noting that having clear intellectual property rights is important to investors. “Clean deals are the best all the way around.”

The future for Iowa State startups may be even brighter under President-select Wintersteen, who in her public forum as a finalist placed a major emphasis on entrepreneurship. It’s been a highlight in the College of Agriculture and Life Sciences, where she has been dean since 2006.

That college has the steadiest flow of serious startups, Adamowski said. That may have to do with the business lessons that come with farming, which many ag students are exposed to at a young age, Kimle said.

“By nature, in agriculture, a lot of people have very hands-on experiences,” Kimle said.

But Adamowski has been recruiting more ideas from other Iowa State colleges, Engineering and Design in particular. He’s also hoping to make it easier in some way to tap into the university’s alumni base in search of startup investment. Wright is looking at ways to encourage more women and people of color to start companies.

“You don’t want the chips to just fall where they fall,” Adamowski said. “If you’re creating a culture of change, you can’t look at it that way.”

The Startup Factory is hoping to take that culture change statewide. The program received a $200,000 state grant earlier this year to expand to four other sites across Iowa, in partnership with community colleges and private universities.

“That’s the part I like about it. Getting explorers to commit,” Adamowski said.